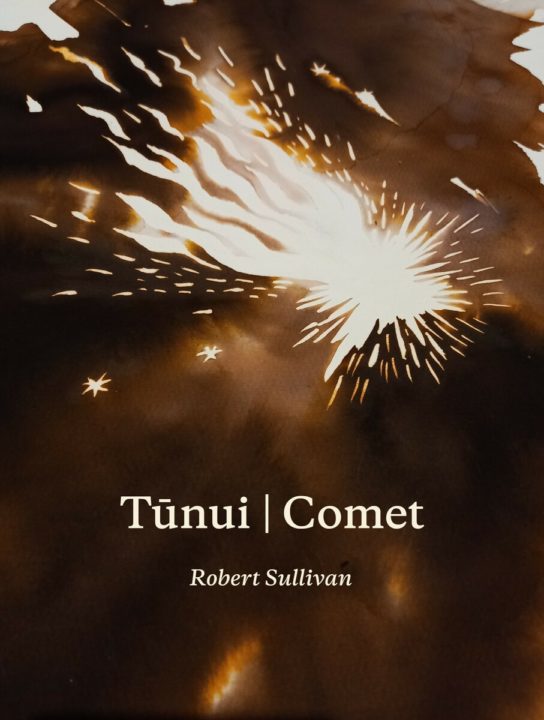 ‘Comet the hour, comet the man.’

This is an impressive new collection by an important Aotearoa New Zealand poet. That it has been thirteen years since Sullivan had a collection published makes the reading of this volume all the more enjoyable. Even if the 34 poems –- several rather brief –- flash through only 66 pages.

Rather a lot of adjectival praise so far, eh? I will be more clear.

Impressive because Sullivan has the gift of making pointed perceptions yet does this in a calm fashion.  And often about both historic and contemporary injustices; such as the implicit and more manifest racist tendencies of many a Kiwi. His is the wry, not the rant. As in Rock Art, where the speaker is very tempted to bite back at an ignorant ‘’male cyclist’, but instead,

the other limestone cliffs

remind me what was what

He is a poet of craft. He conjures up clever imagery without either  arcane vocabulary or abstruse references.  Neither are there too many words.  His is the economic, not the esoteric. Take for instance,

I have sent my daughter

north where the sky

bathes the most red,

And it is precisely because of his most effective eloquence that I make the claim that this long awaited book is such an enjoyable read.

And there is more than mere eloquence to admire. Sullivan has begun to write more, much more, in te reo Māori, despite his self-admitted apprenticeship stage of practice.

in the roar of English’

It is  by making this linguistic voyage, by nurturing the seed of his reo and thus seeing it grow, that he also explores his own being.  Both in a subtle and sound sense, he cements who Robert Sullivan is –- now –- in this third decade of the century. I found it interesting that the collection is dedicated to his mother, Maryann Teaumihi.  Indeed, several of these poems touch on his ancestry and the historical peeling  away from his Pākehā heritage.  Many acknowledge,

.the importance of harmony

between us, Māori and Pākehā,’

The sequence Decolonisation Wiki Entries, for example, sees the poet with a foot in two worlds, exploring both and concluding,

When my training is complete

I will be ready to learn about the Treaty.   (Decolonisation Wiki Entries, p.15)

Indeed, the past and the present are often conflated across these pages, entangling colonisers and reputedly colonised.  Sometimes in dialogue, but more often than not.  Not.  As in the ponted Parihaka poem Feathers. And an  infamous Sullivan favourite,  Captain James Cook appears here and there several times, identified by name as well as alluded to in poems such as ‘i wasn’t a poet for writing place names’.  He is never portrayed as a hero,

What if we had gained the friendship,

love and trust of the Natives…

and to make amends?

There is more to the collection than a personal voyage or  a chronicled rebuke.

There are  poems honouring Alistair Campbell, Keri Hulme, and Hone Tūwhare. And one that reveres  Moana Jackson,  in one of Sullivan’s more frank pieces, He Wakaputanga.  We see a nod to the Great North Road, Ihumātao, Old Government House and more emphatically to a hui held in Whitianga, and its many tangential facets, in the lengthy  panoply Te Whitianga a Kupe.  Star waka returns. Ko ngā manu whakaehu te wā katoa rāua ko ngā tuna/taniwha.

He has answered his own karakia, Tētahi Waerea (Prayer of Protection),

‘our songs and voices in te reo Māori

lifted me with many pairs of arms

so I had wings agai…’

It has been a long homecoming.’

The Ngāpuhi comet has landed after aeons streaming across the cosmos, and the comet tail is not pale. Never was.

‘Comet the hour, comet the man.’