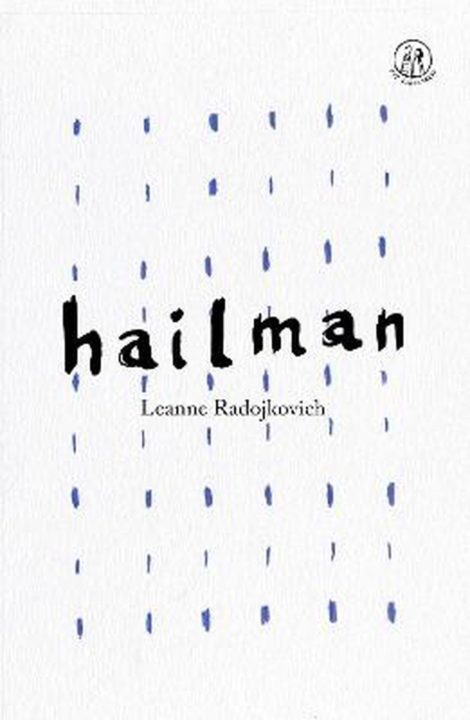 Leanne Radojkovich carries her readers across a range of emotions in Hailman. This is the author’s second book in the short-form.

There is nothing ‘showy’ about Radojkovich’s writing. These are the well-honed words of an expert. Most of the stories use carefully crafted first person narration. In fact, there is such close proximity to the storyteller it’s easy to forget these tales are fictional.

We walk alongside the main characters. When they experience hunger, debilitating sorrow or jetlag, we feel it with them. We gasp when they gasp and believe their worlds entirely. Each story leads one to the heart of human longing and wanting.

The author knows how to tell a good story. Radojkovich has the ability to pare down to the bare essentials, shunning elaborate poetic meandering, and yet the pieces are nuanced with poetry. She uses concrete statements to lead the reader from one scene to the next. The stories have been curated with care and precision, with common themes threaded through the sequence. For example, bird motifs appear in various forms:

In ‘The Vilina Vlas Hotel’, a photograph of the protagonist’s mother feeding a swan haunts the character. We hear the whor-whoh of a ruru in “Where the River Meets the Sea”. An apparition of the protagonist’s father appears in “Drive-by”: “He was there, thin as a bird’s wing.”

The stories are crisp and clear in their simplicity, and yet underpinned by Radojkovich’s characters’ rich history. Loss and hardship flow beneath the surface.

It is particularly poignant in the final story ‘Growing’, where the protagonist’s mother, Irena, has hidden her history – or perhaps it was lost to her. As a child, Irena has no answer to the question: “Who do you belong to?” But, at the end of the story, as Irena’s life approaches its end, she reveals something her daughter has never known before.

Startling revelations like this astound the reader throughout these ten stories. Radojkovich is a master of understated endings. There are no entangled denouements. The reader feels the characters carry on with their lives beyond the story, yet we have the satisfaction of knowing everything we need to as we leave the page.

I have read some exemplary short fiction in recent months: The Father of Octopus Wrestling by Frankie McMillan, Stronger Faster Shorter by David Swann, The Naming of Bones by Jan Kaneen and Nothing to Worry About by Vanessa Gebbie. Even amongst these tall giants, Hailman holds its head high.

I really believe that. I loved the book.

Nod Ghosh is a graduate of the Hagley Writers’ Institute, and his been widely published. Truth Serum Press released  novellas The Crazed Wind in 2018 and Filthy Sucre in 2020, while Toy Train is forthcoming mid-2021.