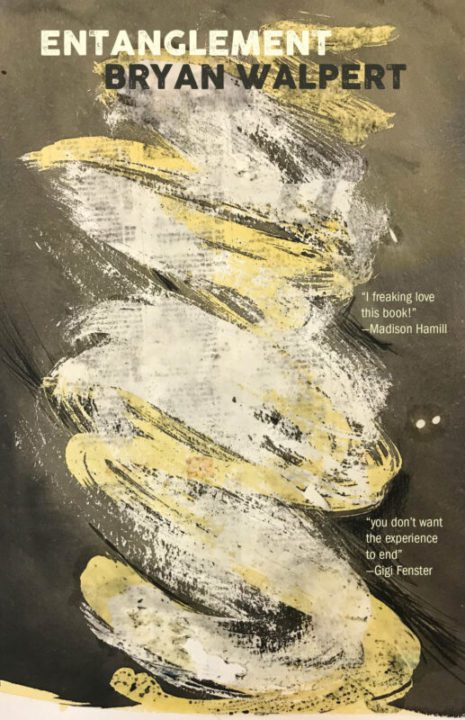 In some regards, Entanglement is a simple story about twin brothers. One twin, Daniel, gets into a fight with some local kids and is severely injured. As an adult, he lives in an assisted living home in Baltimore. The narrator, Daniel’s twin, ran from the local kids and was left physically unscathed, though he carries the guilt of leaving his brother to the bullies. The narrator’s central preoccupation is how to go back in time to save his brother from this fate.

The narrator visits ‘his’ Daniel every Tuesday at the same time. His only stretch away from his brother is when he’s on a writing residency at the Centre for Time at the University of Sydney. When he returns to Baltimore, the now seemingly immoveable appointment sets off another chain of events that has tragic consequences for the narrator and his family.

It’s also a love story. The narrator hooks up with Anise, a New Zealand philosopher, while on the residency. It’s a story about the struggle to wrangle relationships, work, and family.

Yet, it’s also a story dominated by time and scientific language about time. One of the preoccupations running through Bryan’s poetry and academic work is the link between science and literature. In Entanglement, the narrator talks to academics about physics theories, like time curves and world lines, and listens to philosophical arguments about time. Like the narrator, during these discussions, I ‘found myself a bit out of my depth rather quickly’ (p. 80), and ‘I had a lot of trouble getting what he was saying at times’ (p. 109). While the narrator’s admission lets the reader off the hook a little, in terms of having to wrap their head around the theories, other strands of the narrative illustrate the many movements and the felt experience of time.

At times I did wonder whether we needed these explicit physics lessons. I remember in writing classes being told to not insert swathes of research into a narrative because it draws attention to itself. “Look here, I’ve done lots of research”, it says while snapping the reader out of the imaginative experience. Of course, the author has done this on purpose, he’s put literature alongside scientific language. A lived experience of time alongside the theory of it. It also suggests the performance of knowledge. The academics the narrator speaks to give lectures, or speak to the narrator in their offices, or at social gatherings. The narrator is a writer who also performs his work at a reading. By doing so, is the author positing which language best represents the world, whose language is performed the most successfully, or which language can effect change on the individual?

One way the author manipulates time in the novel is through the use of various narrative strands. On his residency, the narrator writes a journal throughout (in first-person point of view). Yet, the journal starts in October 2011 and runs back to July of the same year. There’s also a time traveller section (second-person point of view) in which the narrator has returned to Baltimore in 1977 to try and save his twin brother. In another section, the narrator is on a writer’s retreat in 2019. Within this section, told in the third person, the narrator is responding to writing prompts that reveal his family’s trauma. This sounds complicated, but it reads smoothly. Each strand dovetails each other as the reader builds a picture of the narrator’s life. From the narrator falling in love with Anise during the residency, through to the challenges of combining a career with family life mentioned in the writing retreat exercises, through to trudging through the snow of Baltimore to find his brother, Daniel.

Within these narrative strands, there are long sentences and paragraphs. Great swathes of language. Episodes in the Lake Lyndon Writers Retreat sections have paragraphs that at times go over several pages. Each section is prompted by a writing section, such as ‘Describe a minor blemish in a character’s appearance’, which the writer responds to (p. 34). These sections delve into the narrator’s past, his marriage, and family life. Writing exercises can sometimes tap into a stream of consciousness, an outpouring of memory and emotion that doesn’t parcel itself up into small paragraphs, or even short sentences. But these sentences aren’t rambling; they are precise, detailed, and balanced. I wasn’t reading the sentences hanging out for the full stop. It’s the section I enjoyed the most, most likely because it revealed the most about the narrator. As well as clear, precise and descriptive language.

In the following section, the narrator talks about having some time for himself at the start of the day, before family and work beckons:

But more often he walked through the kitchen, through the living room, onto the small deck that faced east, where he sat shivering – shivering because the noise required to get a sweatshirt from the bureau or jacket from the closet at the end of the hall would risk waking his wife and daughter. Sometimes he would even walk across the cold tiles of the kitchen without socks rather than search for them in the dark, walk across the carpet strewn with toys, then step barefoot into the very cold wood of the deck from which he could watch the first sunlight blossom beneath the clouds (pp. 57-58).

In one sense, this feels like an everyday domestic scene. Yet the long sentences give it such motion, as the narrator walks through the house, and the sensory details make it seem somewhat extraordinary. As is having time to yourself, when you have children in the house. He clutches for time to himself, rather than any apparel. It’s time that gives him comfort, rather than leaving out any clothes that he can easily grab first thing in the morning.

Yet, at times, I became so preoccupied with the scientific and philosophical language, alongside the manipulation of time and how they all fit together, that the characters became an after-thought. Anise is an intellectual and comes off as a bit aloof initially. Later, she seems full of impatience. We don’t see a great deal of Daniel, and even the name of the narrator is withheld. And the academics seem to be there for function rather than as individuals. One is a bit patronising and jealous of the narrator’s relationship with Anise, and another, Steve, is very fond of red wine and has ‘“several overlapping glass ring’” stains on his oak table which he appears unconcerned about (p. 195). I guess, as a reader, I didn’t see them as fully- formed characters because I was so focused on the theories they were there to explain.

Yet, the daughter is shown fully as an individual, and her relationship with her father is lovely. While also showing the impatience of a parent who wants to write, and how that need to write pulls him towards his brother and away from his daughter:

He knew, as she did, that whatever writing he did that had nothing to do with the academic job or freelance work he did to bring in the money to help support that very same daughter had to do with Daniel. It had to do with working through, however fictionally, the need to flagellate himself for what he had done. He knew the space he took for writing, the speed with which he dealt with the daughter, not quite in the moment but in the moment he was chasing, needed to be added to the times he answered the many daily phone calls and weekly visits (p. 64).

Time, writing, the past incident with Daniel, and his current relationship with this brother, alongside the demands of family life, are entanglement in moments.

The time traveller section was also affecting. The trudging through snow, the random violence, but also the sense of surveying your own life while not being sure if you even belong there. It’s an alluring idea, time travel;, wanting to go back to fix the past. Of course, it’s a familiar science fiction trope, though as a realist I was more than happy to go along with it.

There is so much packed into Bryan’s book that this review only skims the surface. In some ways it feels like he’s thrown the ‘creative writing’ book at this novel – he’s a professor of creative writing – because there’s so many structural and perspective techniques used. Even the way dialogue is set out. And there are quips about writing. The narrator refers to himself as writing the same book over and over (p. 169), and Anise asks him whether he’s writing down their conversation for his book (p. 83). Later on, she asks, “are you going to put all of this in the novel? How are you going to weave it in?” (p. 196). So, the relationship between truth and fiction is touched on. What facts we mine for fiction. Who we use for fiction, and of course, the time we take (or try to take) away from our families to write.

I enjoyed Entanglement. It had a lot of heart and beautiful language, I just wanted more of that and less of the explicitly scientific language. I was happier to be shown the narrator’s relationship with time, the felt experience as demonstrated through the various narrative strands. I guess I’m just more willing to be persuaded by literature and emotion, rather than scientific language. But maybe, that’s the point.