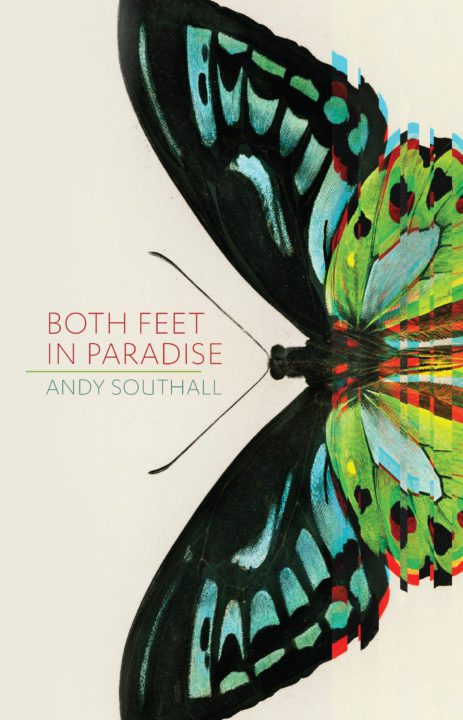 Adam’s taxi is late. He’s harried while trying to reassure himself that he has enough time to catch his flight to New Zealand. Adam has spent months in Samoa researching butterflies and is eager to get home to his wife and kids, especially his daughter Naomi who has recently recovered from leukaemia. As readers, we feel the anxiety of waiting for the taxi, and it increases as the driver takes Adam on a wild goose chase which ends in a field rather than the airport terminal.

This is Southall’s second novel after Making Meredith, a historical mystery. He also writes science fiction, along with travelogues. Originally from the UK, Southall lives in Wellington. He received an NZSA mentorship to complete Both feet in paradise.

Southall does a great job of ramping up the anxiety in the first third of the book. He brings the action to the brink of absurdity, but it remains believable. We feel each excruciating tick of the clock as we realise the chances of Adam catching his flight are nil; when he realises he can’t pay for a meal when his credit card declines, and again when he misplaces his passport. The internet is down, so Adam can’t contact his wife, Ruth, and the phone number he has for his family’s home doesn’t work.

The locals that Adam approaches for help seem rude and unhelpful, to the point of obstructing his wishes. Yet, as Adam’s life seems to become more desperate, a stranger called Eve comes along and helps him. The biblical names set up a Pacific Garden of Eden. But instead of a snake bite, it’s a centipede that swipes. It makes us question who holds the truth in their relationship; indeed, the truth of what is actually going on.

When we do get an inkling, the narrative drive ramps up, then dissipates a little. Yet it’s a compelling read and being able to maintain Adam’s perspective for so long is clever. The symbolism of the butterflies that Adam collects connotes a metamorphosis, of the spirit overcoming a physical prison. In the novel it’s the isolation of the island, and whether it’s possible to escape not just the island, but yourself.